Best Bitcoin wallets for Android in 2018

Bitcoin (BTC) was originally invented as a decentralized and easy-to-use payment system. To this end there are a huge amount of wallet applications available for Android phones and devices, allowing you to take your BTC with you on the move.

In this guide, you'll discover five of the most popular Bitcoin wallets for Android available today. While we've tried to select apps that are as simple to use as possible, if you do have a large amount of BTC you may want to choose a wallet with more security features such as GreenBits. If you only have a small amount of Bitcoin and just want to test the water, you can get started immediately with apps like Bitcoin Wallet.

Bitcoin isn't the only cryptocurrency on the market today. If you hold any other kind of virtual currency, or would like to exchange some of your coins, you may prefer a multi-currency wallet such as Coinomi.

When picking a wallet that's right for you, whatever choice you make, we strongly suggest you stick to the ones available either in the Google Play store or the F-Droid repository, as these are less likely to contain malware. 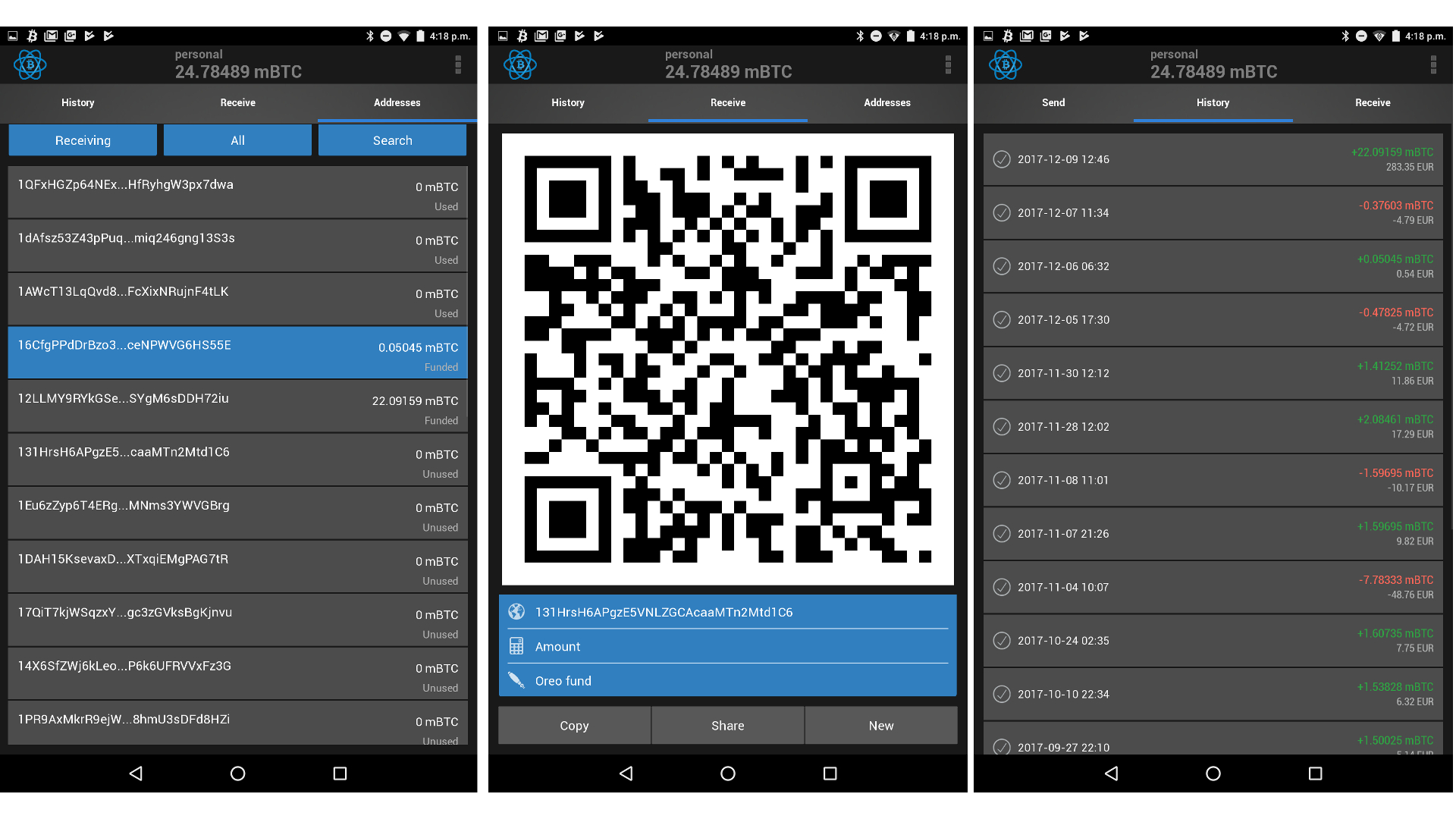 Electrum is well-known in the Bitcoin world as one of the most popular 'thin clients' for storing Bitcoins, and the Android app doesn't disappoint. After downloading, your wallet is generated using a 'seed' of 12 random words, which you must write down. If anything happens to your Android device, you can then use this seed to restore your wallet along with your BTC. Your 'private key' is not locked in to Electrum and you can export your BTC to another wallet if you wish.

The Electrum Bitcoin Wallet for Android takes security seriously: your seed and private keys never leave your device. During setup you're also asked to create a 6-digit PIN which is used to confirm payments. If you already use the desktop version of Electrum, you can even set up a 'watching only' wallet on your phone which lets you view your balance and receive BTC – but not send them.

The most recent version of Electrum Bitcoin Wallet comes bundled with its own QR scanner to easily capture wallet addresses and send payments. To receive BTC, just tap on the 'Receive' section to display a handy QR code for others to scan. This feature is only compatible with the ZXing QR Scanner. If you use another app to scan codes, be warned that this may cause compatibility issues. 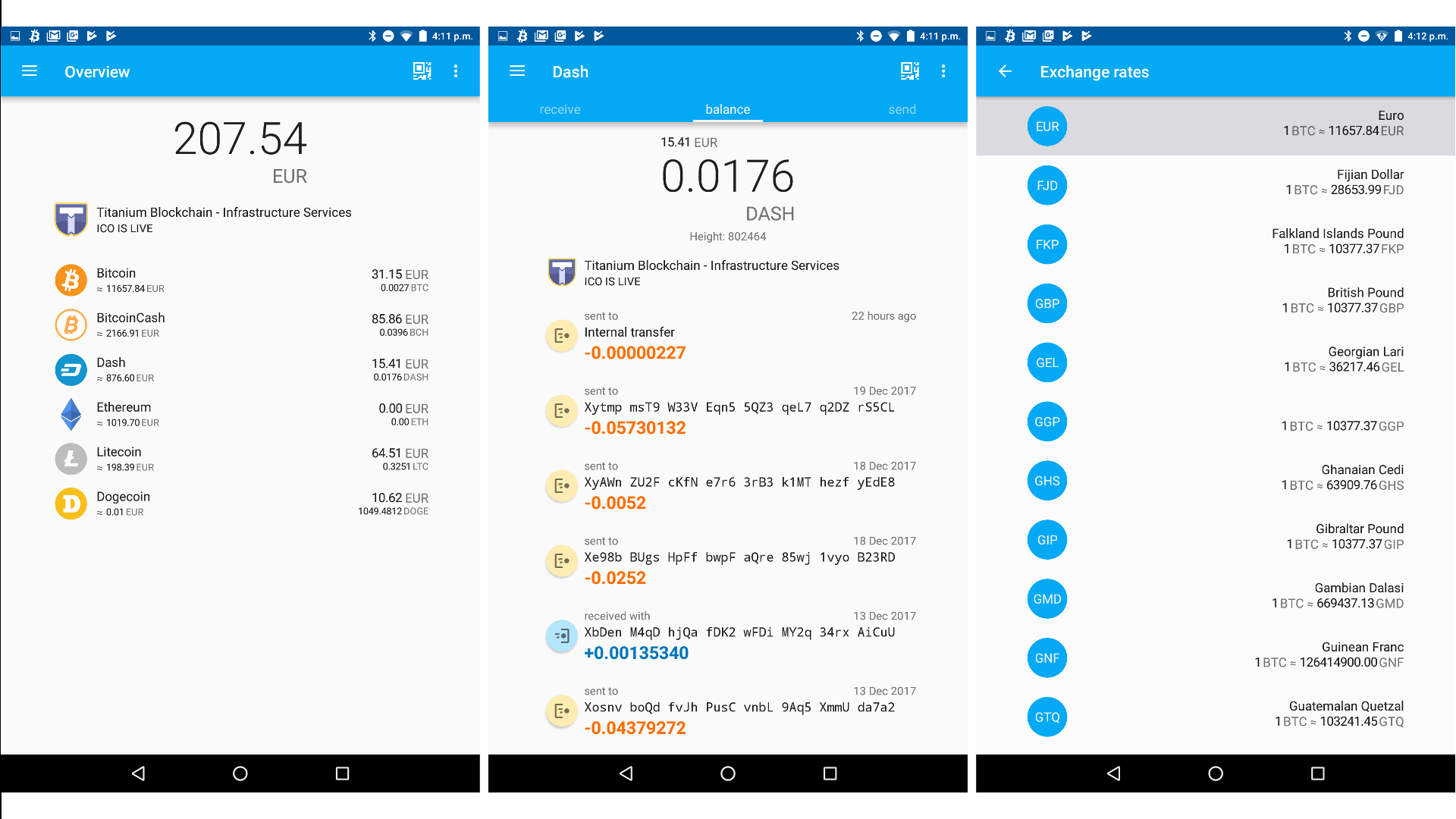 Coinomi Wallet was originally created in 2015 and has since developed a solid reputation as a great wallet for storing not only Bitcoin but other cryptocurrencies, including Litecoin, Dash, Bitcoin Cash, Ethereum, not to mention any amount of Ether tokens. During setup you can choose which coins to display in the handy 'overview' section which lists the current market price and value of each currency.

Like Electrum, your wallet addresses are generated using a 'master seed' of 12 random words which never leaves your device. You can use this to restore your wallet balance for all of your coins should anything happen to your device. Coinomi offers the option to set a password during setup rather than a mandatory PIN as with Electrum. If you choose not to set a password, make sure your Android device has screen lock enabled and is encrypted.

Coinomi has integrated support for exchanging different coins using either of the services Shapeshift or Changelly for a small fee. User reviews have reported occasional issues with this whereby transactions don't confirm for some time, although this wasn't an issue during our own tests.

As of January 2018, Coinomi also no longer appears to be open source. This means that it's very difficult to know if there are any undisclosed security bugs or backdoors in the software.

Mycelium is one of the most highly acclaimed Bitcoin wallets around. The website claims that Mycelium won the ‘Best Mobile App’ award from Blockchain.info in 2014, and that there's no wallet which has more stars from reviews on Google Play.

Mycelium is entirely open source, which means it's much easier to check for any software bugs, and also near-impossible for developers to include hidden backdoors to steal your BTC.

The interface is laid out in very simple fashion with buttons to send and receive BTC as well as scan in QR codes. Mycelium also has a built-in address book for making payments.

The settings section of Mycelium contains a massive arsenal of security features. First and foremost is the security PIN which you can set so that Mycelium requests it each time you make payments. The app also supports sweeping private keys from paper wallets, as well as 'cold storage' wallets which will only display your balance, and cannot be used to send BTC.

Although there's no desktop equivalent of Mycelium, you can use it with hardware wallets like Trezor to digitally 'sign' transactions. This makes it much harder for anyone to steal your Bitcoins.

At the time of writing Mycelium doesn't support Segwit. You can read more info about what this is and why it matters here. However, this should not affect everyday transactions.

GreenBits is a secure and open source Bitcoin wallet. It is truly cross-platform in that as well as being available for Android, there's also a GreenAddress Chrome extension allowing you to manage your BTC from any device running Google’s browser.

If a person or company supports the GreenBits wallet service, BTC can be sent without needing to wait for confirmation via the Blockchain (which can take hours or days), allowing for near-instant payments. Each payment also has a unique 'hash' preventing fraudsters from spending the same coins twice.

During setup, a 24-word mnemonic is created which you can use to restore your BTC on another machine if anything happens to your Android device. The app also prompts you to set up payment confirmation via two-factor authentication.

GreenBits is secured via a PIN which you create during setup. If you fail to enter the PIN correctly three times, your wallet's decryption key will be destroyed. After that, the only way to recover your BTC is by re-entering the 24-word mnemonic.

This makes for a very secure wallet, although the setup process might be a little intimidating for newer users who only hold a small amount of Bitcoin. The good news is that once you have secured your wallet, the interface is very easy to navigate. BTC can be sent by entering an address or scanning a QR code.

With BTC transaction fees skyrocketing at present, users may also be concerned that there's no built-in feature to manage these either. Bitcoin Wallet simply informs you what the transaction fee will be.

The developer of the free and open source Bitcoin Wallet claims that its Android app is the oldest in existence, and that it's one of the easiest ways to get started with Bitcoin.

Unlike other wallets which require you to set up a PIN or write down a seed, you can use Bitcoin Wallet immediately after installation. The interface couldn't be any clearer – simply click 'Send' or 'Receive' to manage your BTC. There's even a handy address book to keep track of your favorite payment destinations. Your current balance is displayed in mBtc (millibitcoin) by default, as well as your local fiat currency, but you can change this in the app’s settings.

This extra simplicity comes at the price of security, however: anyone with access to your device could open the app and steal your Bitcoins. Your private keys, which are used to send payments, are stored securely on your Android device, but there doesn't seem to be an easy way to recover your BTC if anything happens to the device itself.

The app does, however, support 'sweeping' of paper wallets – in other words, scanning the private key of a Bitcoin paper wallet to empty it and add the BTC balance to the wallet app.