The terminal is the beating heart of Linux, no matter how hard today’s user-friendly graphical distros might try to push it into the background. If you need something done quickly and efficiently, chances are the best way to do it is with some complex keyboard wrangling. Exactly what to type is beyond the scope of this article – check out our guide here to get yourself started.

The key, if you’re a terminal-slinging Linux badass, is to make sure you type those commands with as much style and panache as possible. And while you’ll likely never be in a position where you’re not able to drop to a straight full-screen shell, having a quick window to the command line on your desktop is always handy.

Of course, your Linux distribution will have a ‘Terminal’ application already such as xterm, Gnome Shell or Konsole – but this probably isn’t as good as your emulator could be. Let’s refresh your view of those plain old white-on-black characters, as we explore our top six Linux Terminal emulators. 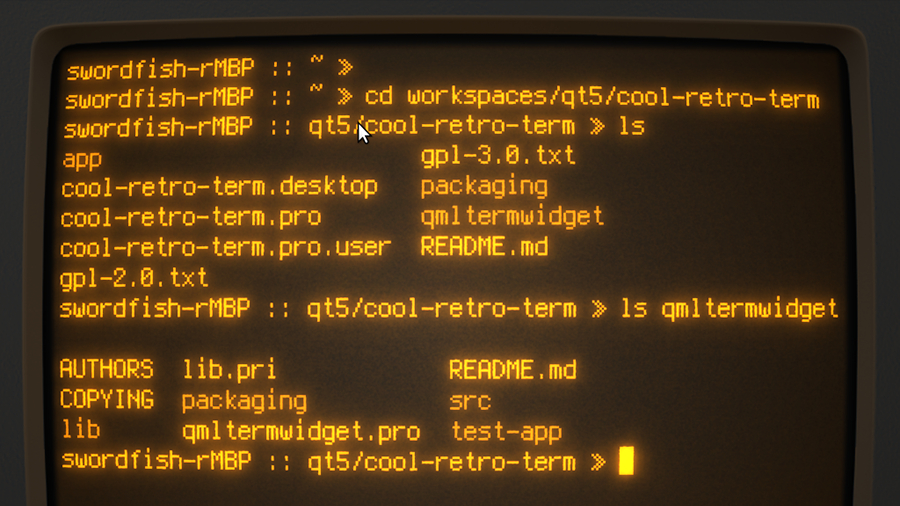 If you have a bunch of CPU cycles and graphics processing power that needs using up, you’re sure to get a kick out of Cool Retro Term. It emulates the look of a really old-school cathode ray monitor, complete with phosphorous glow, burn-in, and bloom around the characters. If you cut your teeth with the monochrome screens of the early eighties, this is a nostalgic (and highly customisable) trip back to the past.

While the usefulness of some of its features is questionable – particularly the optional screen jitter replicating a slightly dodgy signal cable, and some of the older fonts – Cool Retro Term (CRT) is a beautiful toy to play with. 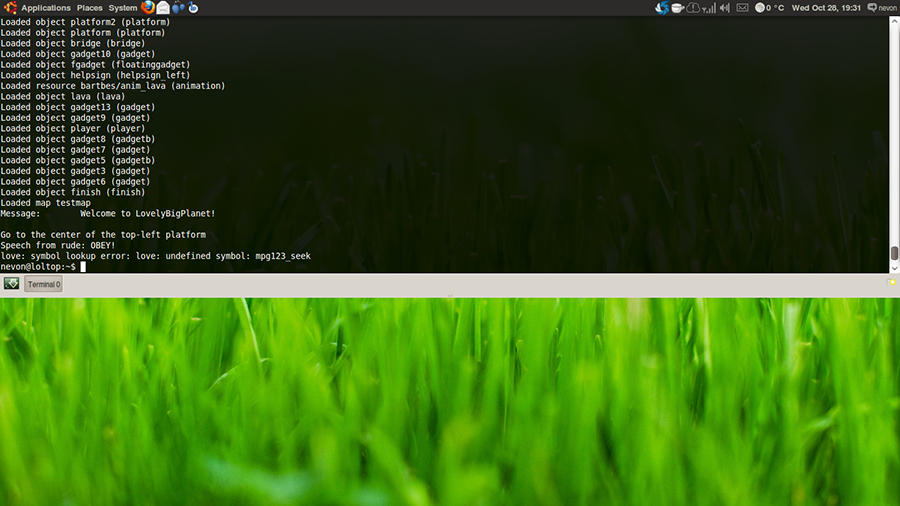 This Terminal emulator, crafted specifically for Gnome, takes inspiration from the classic shooter Quake, as its name suggests. Guake doesn’t offer you quad or mega-health power-ups, red armour, or even come branded with Quake’s classic brown-on-brown colour scheme, thankfully. Instead, it apes the behaviour of Quake’s console, un-hiding itself and dropping down from the top of the screen when you hit a hotkey.

This behaviour is highly useful, particularly when you’re working with a small screen. There’s no need to keep a window open, hunt around for the Terminal icon when you need to type something useful, or check your performance in htop. Just tap [F12] to bring it down, or [F11] to make it full-screen, and you’re away.

Guake also comes with a selection of neat colour schemes, giving you a few stylish options. There are similar options for other desktops, too: check out the likes of YaKuake for KDE or the GTK-based tilda. 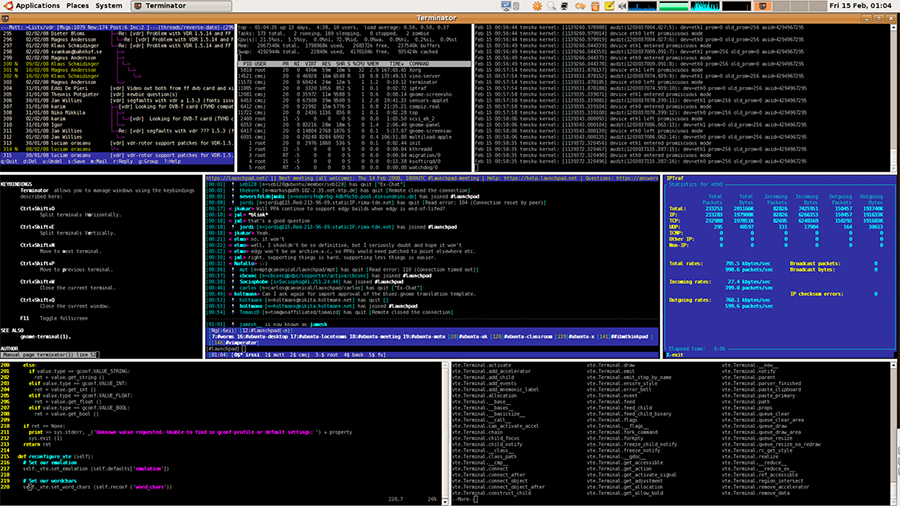 How much street cred does a single Terminal window actually afford you? Every command line warrior worth his or her salt is jumping between a number of different sessions for different tasks, has one eye on htop (or similar) at all times to manage system resources, and so on.

There are actual shell-based options for this – GNU Screen, for example, or tmux – and Gnome Terminal allows you to open extra tabs and flick between them. But Terminator, which borrows much of its code from Gnome Terminal and tends to update as soon as its parent does, splits up your different sessions into individual panes within a single Terminal app.

This means you can have everything open and available at one time – keep an eye on stats, watch a text-mode clock like vtclock, edit docs in nano, run whatever commands you need, all from one grid interface which can be tweaked as your needs require. 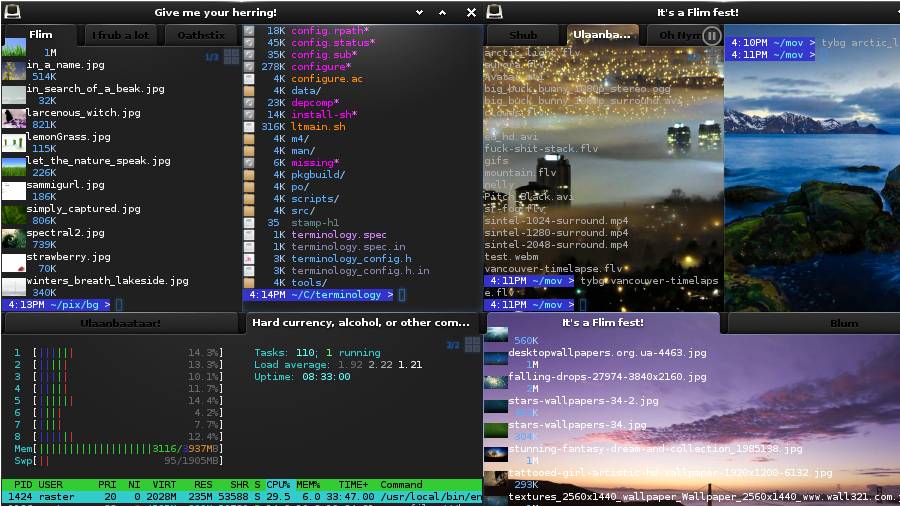 Some people lean on the Terminal as their default method of Linux navigation, which can be a little restrictive. Normally you’d hunt down a file, then have to jump to a graphical desktop application to preview it, unless it's a plain text document. That isn't the case with EFL-based Terminology, an app which celebrates the Terminal while doing away with its more irritating old-school features.

Files, URLs and email addresses can be automatically previewed in Terminology’s window. Click an image, or a video, and you’ll be shown a preview within the Terminal itself. It supports panes (known as ‘splits’) in much the same way as Terminator, and can be customised. Why not apply an individual background image or colour scheme to each split, or fiddle with the transparency for that late nineties ‘look what Linux can do’ vibe?

The options are all there, with text mode triggers and a vast number of settings tucked away in its context menus. 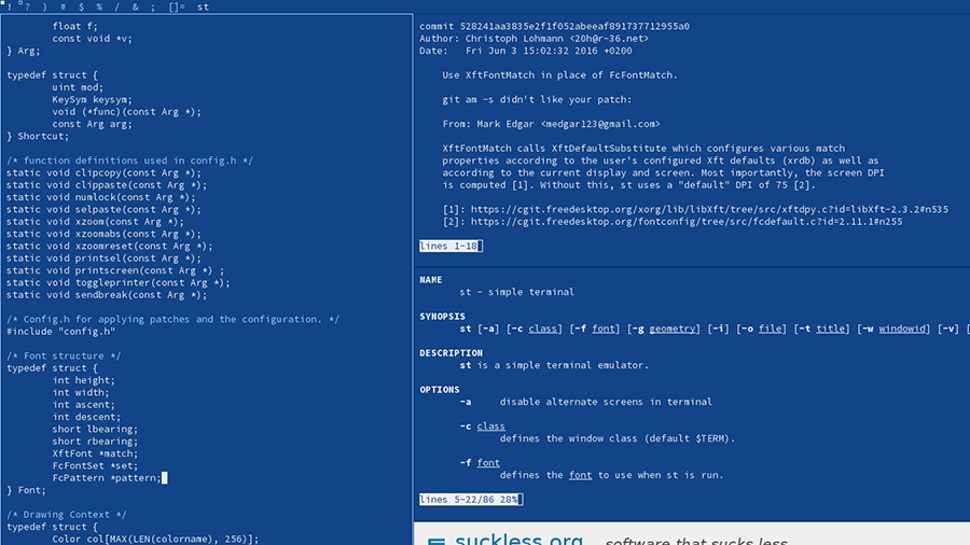 One of Linux’s big issues is that it sometimes does a bit too much. Your chosen Terminal emulator is probably compatible with a whole raft of obscure, archaic and/or unused commands.

This can become very messy as Linux code tends to pass through a lot of hands before being released. It doesn’t have to be that way, though: st is a simple Terminal emulator that does precisely what it’s meant to do and little else.

Don’t make the mistake of thinking it’s all that simple, though, despite the name (st stands for Simple Terminal). There’s still support for all the colours you could ask for, clipboard handling, a full UTF-8 character set, and a lot of font customisation options including antialiasing.

If you’re not one for Terminal frippery and would prefer a more straightforward environment, this is most definitely the one for you. 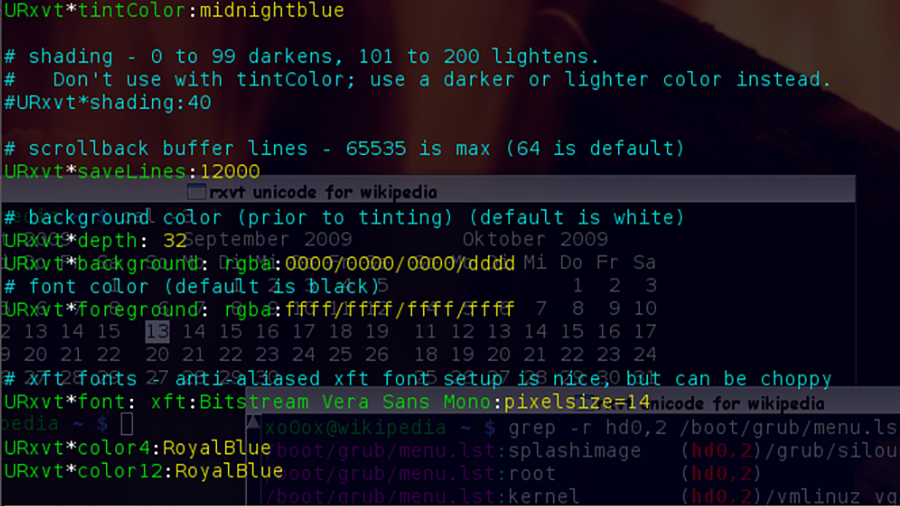 Also known as urxvt, this is the Terminal emulator which many veteran Linux users end up going with. Not because it has pretty graphics or gimmicks, but because it’s absolutely rock solid and free of glitches.

That’s not to say it doesn’t do fancy things: it supports colours, unicode, customisable fonts with italics and bold if required, and even transparency. The main program runs as a daemon, meaning it cleverly conserves system resources when you’re running multiple windows over multiple desktops.

It’s very difficult to cause rxvt-unicode to crash, and that’s its main selling point – even if you’re playing with a more visual Terminal program, having this installed for when it’s time to get serious is a clever choice. Do note, though, that you may need to edit the hardware configuration file to customise it to your needs.