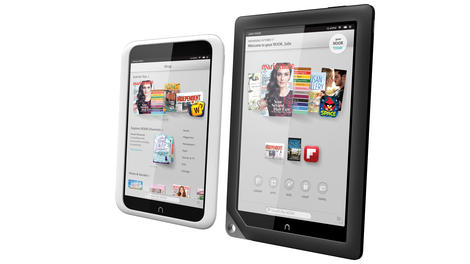 After threatening to ditch the tablet hardware business entirely, Barnes & Noble is now threatening to unleash a new model on unsuspecting consumers, just in time for the summer vacation season.

Mashable reported on Barnes & Noble's fairly bleak third quarter financial results for fiscal 2014 today, but the real news turned out to be a brief mention of a new "color tablet" on the way.

Although company executives declined to offer further details during the quarterly earnings call, the mere fact that Nook hardware is alive and (relatively) well is likely to be music to the ears of its e-reader customer base.

After failing to launch any new tablet hardware in 2013 aside from the black-and-white Nook Glowlight, the company's latest model is expected in "early fiscal 2015," which equates to late May or early June for those of us on the traditional Gregorian calendar.

By Nook or by cook

For those keeping score, it's now been two years since Barnes & Noble launched the Android-powered Nook HD and Nook HD+, which feels like an eternity in the consumer electronics world.

Instead of focusing on splashy new hardware, the retailer instead focused on blowing out existing inventory over the holidays, creating more stock from what executives referred to as "previously acquired parts and components."

Ironically, Barnes & Noble continues to do brisk business with physical books, apparently at the expense of Nook e-book sales, which were largely flat last year.