Pebble with color display on the way? Find out February 24 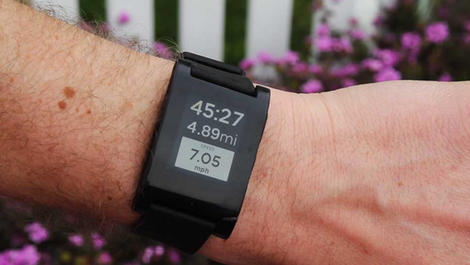 With the long-awaited Apple Watch now expected in April and pretty much everyone else in the tech business throwing out new smartwatch models like T-shirt cannons at a sporting event, the company that helped start the craze appears to be gearing up for phase three.

The official Pebble website has been taken over by a timer on Thursday morning, which is gradually counting down until the calendar flips a page to Tuesday, February 24 at exactly 10AM Eastern standard time (EST).

So what should Pebble fans expect? A recent interview with Pebble CEO Eric Migicovsky earlier this month teased both new hardware and software this year, complete with a new framework to better interact with smartphones.

The countdown teaser displays a happy face on a first-generation blue Pebble display, which doesn't offer many clues, unless you jump to the conclusion that existing devices may wind up receiving a few cool new features.

According to little birdies singing in the ears of 9to5Mac today, there could be any number of items on Pebble's roadmap, including a new watch said to be "slightly wider" with a "color, e-paper-like display... encased in an overall thinner design."

While the rumored new model will reportedly offer similar battery life to the current Pebble and Pebble Steel models, the company could integrate a microphone and possibly even sensors for a heart rate monitor, an option that's increasingly popular with competitors.

One thing not expected to arrive on the next model is a touchscreen, although Pebble may make up for that by offering a "dramatically different" operating system said to be redesigned from the ground up.

It's hard to know for sure how much (or how little) of these leaks Pebble plans to announce come next Tuesday, but we'll be sure to bring you all of the news as it happens.