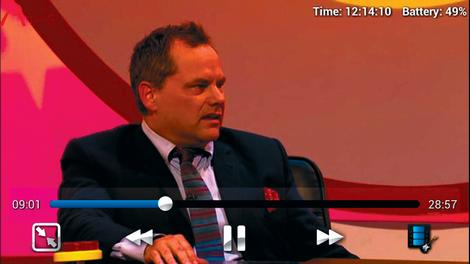 Movie playback is one area where Google hasn't really done much on Android.

Its standard video player is still a defiantly dull grey and lifeless experience.

The software maker clearly much keener on pushing its online sales and rental channels on Google Play, rather than encouraging users to fill their mobiles with their own movie files.

That said, a decent Android model - and even older phones such as Samsung's excellent Galaxy SII - have more than enough power to run today's HD video content.

Although manufacturer politics can play a part in unfairly restricting video playback.

Some mobiles only officially allow their users to play MP4 files, for example, as if they somehow convey more legitimate forms of media than the other movie formats available. Plus, when it comes to video playback, the dreaded (and often overstated) Android fragmentation situation really is a big issue.

But it's a hardware problem in the most part. The huge variety in Android chip suppliers out there, from old handsets with single-core ARMv6 chips up to 2012's quad-core monsters, means that some phones won't work very well as media players no matter what app you use.

Put simply, if your phone is still an HTC Wildfire, none of the apps here will get HD MKV files running smoothly on your phone.

But, if you do have something relatively modern with a fast processor, the following media apps ought to spice up Google's rather boring movie playback options, and at least widen your options when it comes to video viewing.

Our academy has seen them all. And the nominees for best app are…

Pitching itself as a complete package for moviegoers, Flixster lets you stream and download films, build a cloud-based library of purchased titles, check out reviews on its Rotten Tomatoes site, and find cinema listings for those times when a pocket-sized picture just isn't enough. Ad-heavy, but free and Facebook-friendly.

Taking almost any file format in its stride (and offering plugins for the rest), this is the perfect player for movie libraries amassed from a range of sources. Its also a great one to leave with the kids, as its child-lock keeps them out of your inbox and current account.

Claims to "play everything" on its Google Play artwork, and with over 10,000,000 downloads, it's the most popular option out there. MX Player's big selling point is hardware support that's augmented by multi-core decoding, so if you're running a modern dual-core processor, you ought to see a significant performance boost.

With Google making a pretty penny flogging third-party players through its Google Play store, they'd be forgiven for downplaying their own free app – but this a typically slick offering access to thousands of titles to rent or buy, all available for instant streaming or downloading to watch offline.

Much like MX Player, this is an all-purpose movie player designed to decode so many file formats it's tempting to start making them up (kiss my .ass file, Mobo! Wait, it can actually do that one). Offering support for subtitles, playlists and pop-out windows, this Mobo deserves its own award

A comprehensive list of supported codecs makes MoboPlayer a good choice, although being entirely software based means you'll need something with some serious processor power to watch anything approaching HD resolution.

Still, for getting subtitled MKVs and more exotic movie file types running on Android models that don't officially support them, it's a decent, simple and free choice.

Free to download and free to watch, this Flash streaming app intercuts playback with ads for an old-school, ITV feel. Movies are mostly drawn from Sony's back catalogue, so you won't find all the latest releases here (Cops And Robbersons, anyone?), but did we mention it's completely free?

Yours for under a fiver after a week's free trial, VPlayer promises to get the best out of your handset with a choice of hardware or software decoding. Smooth HD playback proves no problem on a dual core device, and it boasts less battery drain than its rivals to boot.

If your tastes lean closer to Bollywood than Hollywood, you could do a lot worse than check out this free repository of Hindi, Tamil and Bengali blockbusters, offering unlimited monthly streaming for a flat fee. If your tastes lean more towards Dollywood, there's nothing we can do to help you. Sorry.

Mmm… Crunchyroll. Another specialist player, this time packed full of the latest Japanese Anime, Crunchyroll offers most download content for free after its first week of release, and ad-free streaming with a paid membership. English subtitles are favoured over dubbing for a fully authentic experience, and the interface is in English, too.

A much-loved (if occasionally moody) open-source player, VLC has yet to perfect its Android offering. Warning that it's liable to "kill your kitten, destroy your house and start the Mayan apocalypse", this beta version is still worth a look, handling most media files and network streams with something approaching aplomb.

However, it's free, plays most media types through a home network, lets you adjust aspect ratios, and much more. It'll be great, when it's really finished.

Love film? Then you need… Netflix, obviously. A monthly sub gives you access to thousands of films via your phone, tablet, console or Smart TV, with the ability to start watching on one device, then pick up where you left off on another. A tempting free trial offers full access for one month.