Windows 10 gets Braille support and better caters for night owls

It’s preview build season, for sure, and Microsoft has pushed out another version of Windows 10 to testers, with the OS getting Braille support added along with improvements to ‘night light’ settings. Oh, and an absolute barrage of bug fixes.

Build 15025 has hit the Fast Ring and improves the accessibility armory of Windows 10 by introducing Braille support in Narrator (although note that this is still a beta feature).

Fire Narrator up and head to Settings > Ease of Access, then under Narrator settings, you’ll find the Download Braille button – click that to install support for the function, and then click the Enable Braille button (also in Ease of Access). You will, of course, need to possess and add a Braille display.

The Ease of Access section also got another tweak, with an option for mono audio to allow visually impaired users who are using a screen reader program to listen with just one earbud in and still hear every sound through that single speaker (in case they want to leave the other ear free to listen to the environment and conversations around them). 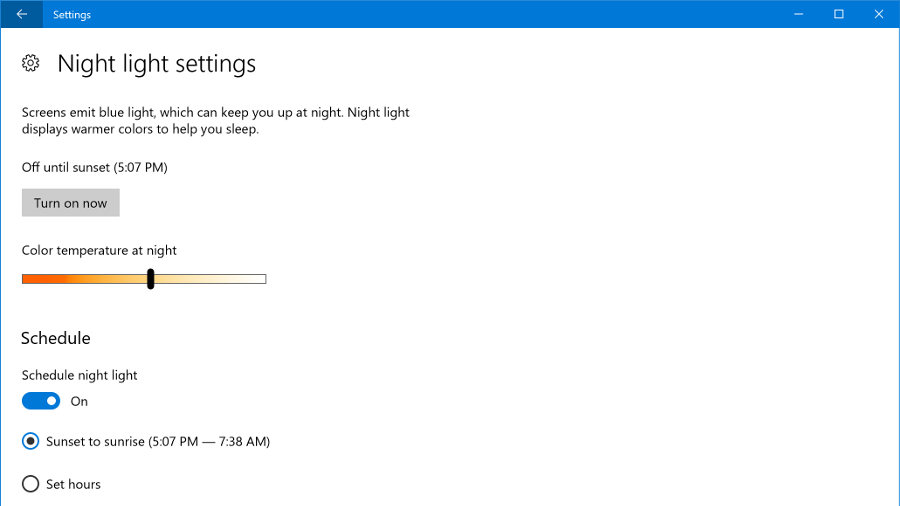 To sleep, perchance to dream…

Microsoft has also improved the night light settings which can be turned on when you’re working (or playing) on your PC late at night – it cuts down the levels of blue light, using warmer colors which are less likely to affect your sleep quality when you do hit the sack. The color temperature slider now works fully across its entire range, meaning it can be turned down to ‘very red’ (1200 K).

Preview build 15025 also witnessed an absolute raft of bug fixes, including solving an issue with games whereby after being minimized, the game was unable to be restored, plus extensions for the Edge browser should now all work correctly again.

For the full list of fixes, and also a number of issues to be aware of, check out Microsoft’s blog post here.