Microsoft has deployed a new preview build of Windows 10 – they’re coming swiftly these days – with support for the eye tracking feature which was announced earlier this week, along with a minor facelift for the Edge browser, and the usual collection of miscellaneous tweaks and tinkering.

Yes, Eye Control is now officially live, albeit still in a beta stage, with only one piece of hardware supported right now – Tobii’s Eye Tracker 4C. Support for other Tobii products is in the pipeline, namely the Dynavox PCEye Mini, PCEyePlus, EyeMobile Plus, and I-series.

Microsoft is (clearly) just working with Tobii currently, but says that it’s open to partnering with other hardware manufacturers to develop broader support for eye tracking.

Eye Control allows you to navigate around the Windows 10 desktop simply by looking to move the cursor, and it’s another major step forward on the accessibility front.

Specifically, it gives the user an on-screen mouse, keyboard and text-to-speech functionality. The keyboard also boasts shape-writing, which can facilitate faster typing (allowing you to pause on the first and last characters of the word, but just glance at the letters in between, Swype-style). 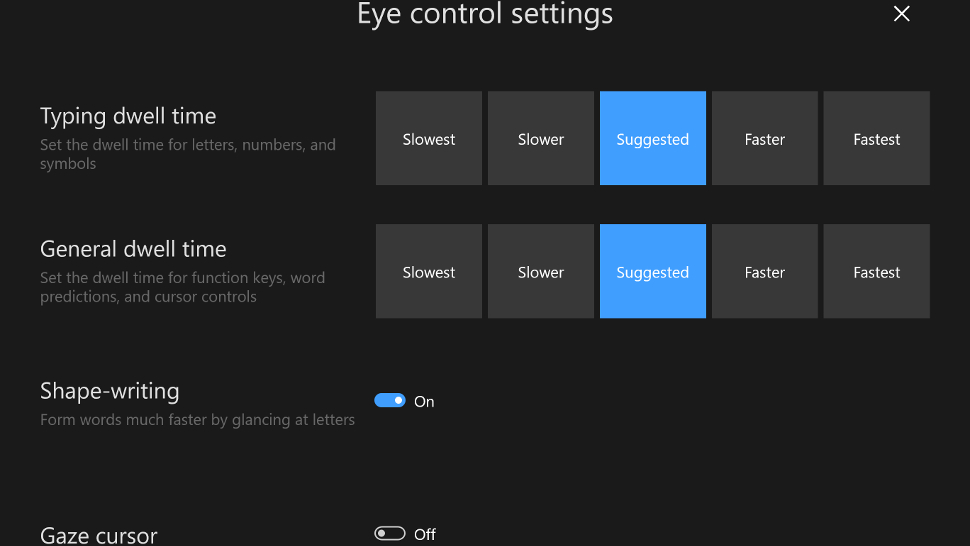 Build 16257 of Windows 10 also witnessed some enhancements for the Edge browser, including a new look, adopting elements of the Fluent Design System with the use of the Acrylic effect to give blur/transparency and added depth to the tab bar.

Microsoft has also implemented niftier looking button animations, and various bugs with the browser have been fixed, which is always welcome.

The Windows Console has been graced with a new default color scheme, following the introduction of support for full 24-bit RGB color in the Creators Update. Microsoft says the change has been made to ensure that darker colors look better on modern monitors, and just to give the console a more contemporary look all-round.

There’s also the usual raft of miscellaneous bug fixes as mentioned, and problems with Narrator in the Edge browser, along with issues pertaining to Windows search and VPN apps from the Windows Store crashing have all been addressed.